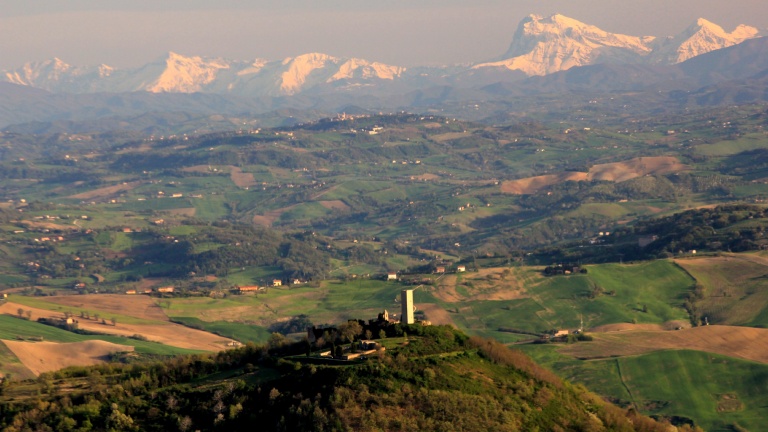 Abruzzo is a generous region, unknown to most and thus marvelous, roughly marvelous. It has the irresistible charm of simplicity, a rare virtue nowadays. It all stems from the conformation of the region, with the Apennines on its western side and the Adriatic on the eastern, which have for centuries preserved its integrity, crystallizing it in a golden, sleepy exile. It’s like a stone garden: mountains, lakes, woods and waterfalls everywhere, valleys that guard ancient Roman cities and towers perched on lonesome peaks. It’s a place where time flows slowly—it may have stopped to let you in. Gran Sasso and Majella, the highest peaks of the Apennines, are the majestic guards to this garden. Some may find them grim, some see them as interesting challenges, some just spend hours gazing at them in hypnotic fixation. Whatever you may see in them, you will have time to decipher it, since these mountains dominate the sky and accompany you all the way to the sea, where the landscape opens up in softer curves.

Such is the secret of Abruzzo’s wine: the eternal struggle between land and sea, which will never see a victor. The sea breezes dry and scent the air, the mountains provide the optimal temperature range, indispensable for the growth of the vine. The archaeologic relics found in the area can testify to this millenary cycle. Ovid, who was born in Sulmona, wrote that this fertile land was dear to Ceres, goddess of crops, but that it was even more generous when it came to wine, whose similarities to its terroir cannot be overlooked: the country character, the strength, the wild scents; it’s well-structured, introverted at first, yet ready to carry you away with its exuberance, which turns into a clear elegance. 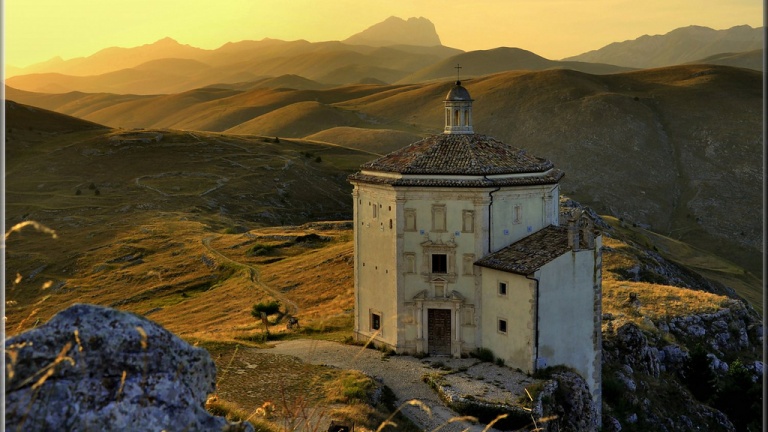 The region’s vine species are primarily autochthonous: Montepulciano and Trebbiano above all, then Cococciola, Pecorino and Passerina. (The last two of which are originally from the nearby Marche, but they can be considered at home here.) Very few producers have been seduced by international vogues: this is no land of Bordeaux wines. In any case, there’s no need for those: it would be madness to change a habit that comes from natural selection.

Don’t think that few vine species offer a monotonous landscape, for two simple reasons: first, the important differences, due to natural conditions, between mountain wines, imposing, and the ones from the coast, more graceful. Second, the awareness of a younger generation of winemakers who are prone to innovate, experiment and dignify the land in which they believe.

Big steps have been taken in the right direction: smaller yield per hectare, vines planted close together, manual processing both in the vineyard and in the cellar, less intrusive woods that allow for more rigorous stylistic refinement. The future looks radiant, the roots still clinging to the knowledge of the elder, while the youth aim high. They should also be praised for their tendency to reconvert to organic farming, favored by the higher elevation.

The Abruzzo Fashioned is a twist of the legendary Old Fashioned that combines the flavors of Abruzzo and Scotland in an irresistible symphony.
Read More
Pici with lamb ragu are a classic dish of the Italian tradition: discover how to prepare the perfect recipe and the right wine to pair.
Read More
How do you eat at the Reale di Niko Romito restaurant? Here is the review, his unmissable recipes and photos of the masterpieces of a great chef
Read More
Tasting of the best Montepulciano d'Abruzzo vintages 2009, 2008 and 2007
Read More
When it comes to pairings, the Montepulciano is an absolute protagonist, possibly one of the most pliable vine species in the world.
Read More
Montepulciano d’Abruzzo Concrete De Fermo 2015: good or great? Super delicious!
Read More
Once you’ve started eating these delicious vegan wine cookies you won’t stop anytime soon! Meet Grandma Antonia!
Read More
Here’s another tasty recipe from Abruzzo, made even more delicious by a cream of Pecorino that enhances the intense flavor of lamb: Easter is coming!
Read More
A little bit of history about Barbecue! Some burning question answered! Who was the first bbqing man or woman? Where and when? What does barbecue mean?
Read More
Here are some simple Easter Lamb recipes from all over the world and of course some delicious red wine very lamb-friendly!
Read More
Next Entries