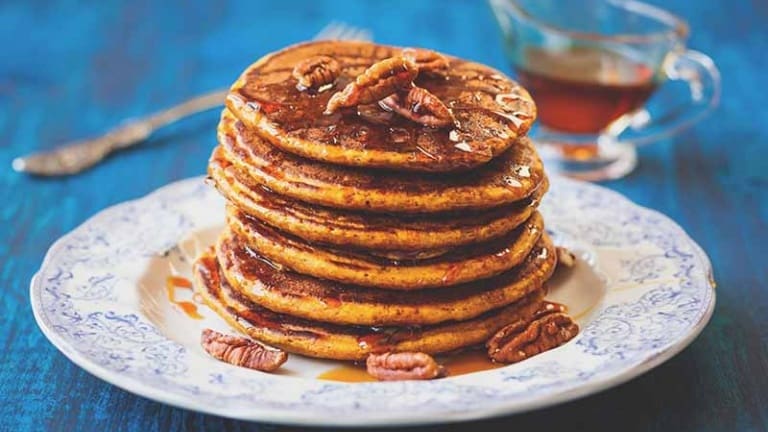 Vegan pumpkin and cinnamon pancakes: the recipe for making a delicious dessert without eggs or milk

Vegan pumpkin cinnamon pancakes are a great dessert, one of the few vegan recipes that if you taste it blind, you won’t be able to tell they are vegan. Indeed it will be one of the best desserts you will eat, but they are nothing but pancakes …

The reason is apparent: all thanks to our beloved pumpkin, which knows how to make even typically anti-vegan desserts such as pancakes velvety, sweet and soft.

Three of the main ingredients of the pancakes are butter, milk-buttermilk, and eggs, so we eliminate the principal fat, the source of the fluffiness, and the binder from the recipe.

But don’t worry, the result is impressive. These vegan pancakes will be even better than the classic regular edition pancakes.

Okay, the squash is sweet and creamy and an excellent substitute for eggs, then we’ll add cinnamon and nutmeg to give it liveliness and a spicy appeal. And then another great protagonist is almond milk. With its delicate taste, but which does not hold back, it manages to act as a binder impeccably.

Let’s finish with the fat: vegetable oil, of course. If you want to add an aromatic touch, use coconut oil, otherwise just plain seed oil, or even olive oil.

Ingredients and doses for making vegan pumpkin and cinnamon pancakes

In order not to make a mistake with the doses, consider that the ratio between flour and liquid should be 1 to 2, and that is, the flour should be half of the almond milk. Same as for classic pancakes.

We remind you again of the secret to making perfect pancakes: do not insist on stirring the dough. Okay, it must be blended without lumps, but don’t put it in the blender and mix for 5 minutes. Let’s leave it unfinished.

That said, put on the apron, and let’s start with the recipe!

Wash the pumpkin and then cut it. Cook it in the oven for 25 minutes at 160-170 degrees. Cover the pumpkin with foil or turn it down if you have a scorching oven after 15 minutes.

Take a large bowl and pour in the sifted flour, the vanilla, the baking powder, the cinnamon that you will grind on the spot, and a sprinkling of nutmeg.

Now peel the pumpkin and put it in another bowl, season with the sugar and almond milk and a few tablespoons of coconut oil. Stir with a fork, mashing the pumpkin well until you have a well-blended liquid.

Begin to put the “flour” in the liquid mixture, little by little, stirring carefully.
As mentioned, however, do not mix too much! Well, cover with a plate or cling film and refrigerate for 1 hour.

When you are ready to cook the vegan pumpkin cinnamon pancakes, heat a non-stick pan and grease them with a piece of kitchen paper soaked in oil.

Pour a ladle of mixture and do not swirl the pan. Let it cook without letting the pancakes expand. They are not crepes! As soon as bubbles appear, turn the pancake over and cook for another 2 minutes. 2 minutes per side.

Once the pancake is cooked, place it on a plate and continue to cook, stacking them one after the other.

Once cooked, serve the pancakes with powdered sugar, melted chocolate, or the classic maple syrup.

In addition to dried fruit and chocolate, you can add 2 caramelized apples in a pan with sugar, lemon, and a drop of rum.

Let’s choose a sparkling Moscato or Malvasia if we want a casual pairing. Otherwise, even a classic sweet wine like Branchini’s D’or Luce. Excellent when paired with fortified and distilled wines such as sweet vermouth, Port wine, Marsala, Madeira wine, Sherry, Brandy, Cognac, and Calvados.

If you want to combine a cocktail, White Russian toda la vida.