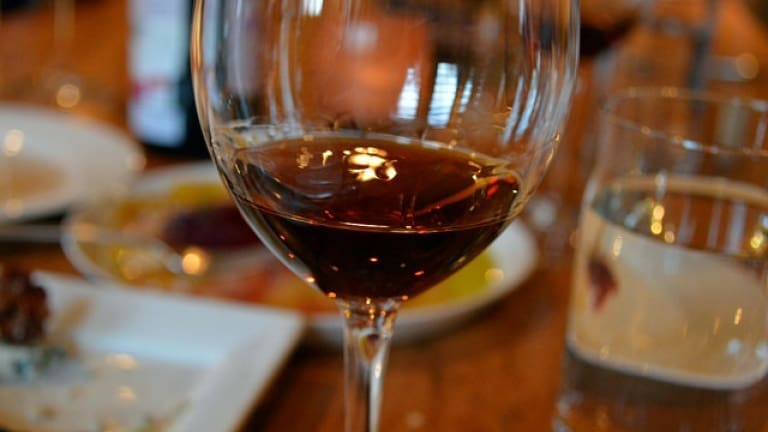 Sherry is a fortified wine produced with Palomino grapes, called Listan in France, in the city of Jerez de la Frontera, in Andalusia. To be precise, it is produced in the triangle between the cities of Jerez, Sanlucar de Barrameda and El Puerto de Santa Maria.

There is a lot of confusion about Sherry, so one thing is clear immediately: Jerez, Xérès or Sherry are fortified wines, but essentially dry, with an important alcohol content of at least 15 degrees. And it was born as a great wine as an aperitif, for meditation or to combine with fish, forget about cherry liqueurs, Cherry or other junk: you can’t make Sherry at home and it is not a liqueur, but a fortified wine. Let’s not talk about Cherry Brandy, which is a brandy-based liqueur flavored with sugar and cherries.

There are also the sweet versions called Jerez Dulce of Pedro Ximénez (PX) or Moscatel or the Cream, but the hard core of Sherry, namely Fino, Manzanilla, Manzanilla Pasada, Amontillado, Oloroso and Palo Cortado are naturally dry. The neighbor of Sherry, Malaga, is a real sweet wine, also made with the Pedro Ximénez grape, which is often considered “a wine”, but beware: it is a grape.

But why is Sherry so good? Why has been produced for centuries? And why is considered one of the most legendary wines in the history of mankind?

The call of the sea 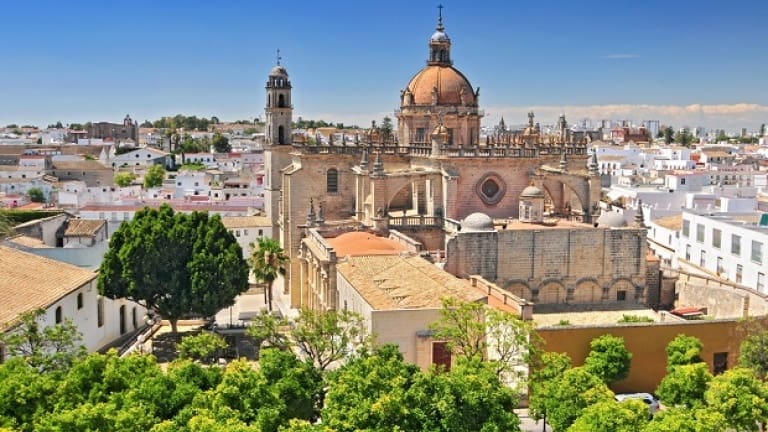 It’s a question of terroir, once again. The best Sherries come from chalk-based soils, which give incredible minerality and finesse to the grapes. Yes, the famous albariza, the same chalk that made Champagne immortal. The sea breezes do the rest, making the grapes practically salty, in the case of the manzanilla of Sanlucar de Barrameda this flavor is particularly marked. The vineyard plots, districts, crus are called pagos and the most famous are Añina, Balbaina, Carrascal and Macharnudo. 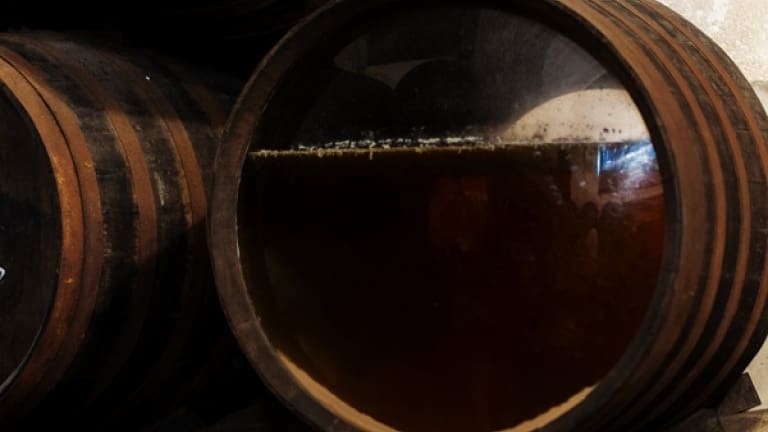 The flor is fundamental, a mold that develops on the wine, protecting it from oxidation. And it is the sea that promotes the growth of the flor, nourishes it and makes it thrive. Think that the fortified wines (which can no longer be called Sherry) produced in Montilla-Moriles, a few tens of kilometers away, have much lower quantities of flor.

Another key feature is the long and painstaking workmanship. The wine ferments completely, so it is fortified with brandy, but don’t confuse it with port, which is instead fortified to stop the fermentation of sugar.

The refining method, called Solera, is also unique. It closely resembles the production process of Traditional Balsamic Vinegar of Modena and Reggio. There are three rows of wooden barrels placed one on top of the other and as the wine ages, it is taken and placed in the barrels below, while the barrels above are topped up with new wine.

For this reason, Sherry has no vintage, it is a blend of wines and different vintages, even if there are Sherry Vos and Vors with more than 20 and 30 years of aging.

The types of Sherry

Now let’s see the Jerez classification for a moment to understand the further production differences. 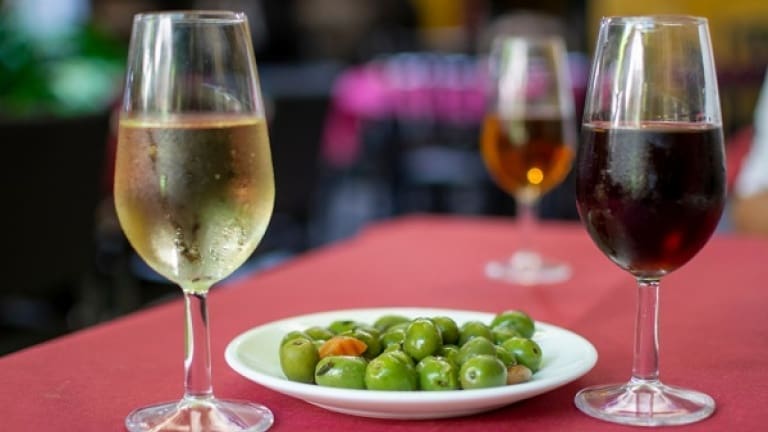 If the wine is fine, elegant and light, it is immediately classified as Sherry Fino and the barrels are only 3/4 full. In this way, space is left for the flor that covers the wine, preserving it from oxidation and acetification. But at the same time it makes it unique, flavoring it with amazing pungent aromas and flavors. The process is natural and is due to the particularity of the yeasts present in the thick peels of Palomino and the influence of the sea.

Just like for the Traditional balsamic vinegar of Modena, Vin Santo and Marsala the passage of atmospheric time is very important and not just chronological: the heat, the cold, the sudden changes in temperature, let’s say the seasons, help to shape the wine.

The Fino produced in the coastal city of Sanlucar de Barrameda is splendid: thanks to the sea wind it becomes salty, as well as pungent. If you have a bottle of Manzanilla Pasada in your hands, it means that it is an aged wine and deserves all your love. It is served as an aperitif, but also with the thousand fish dishes of the Andalusian tradition.

When a Sherry Fino is more full-bodied than usual and lends itself to aging, it becomes Amontillado. But refining the flor breaks down and oxidizes slightly in this way. It is always dry, but its color changes to amber: structure and complexity increase and the classic notes of hazelnuts, walnuts, amaretto and marzipan develop. An Amontillado cannot be sweet.

Full-bodied wines are fortified with more alcohol and reach an alcohol content of 17-20 degrees. In this way, the flor struggles to thrive and much less is formed, the wine then oxidizes, but thanks to alcohol it does not become vinegar. It has a golden color and an enveloping and sumptuous bouquet with notes of dried fruit, spices and mature fruit. It is a very complex wine, but full, alcoholic, structured and in any case dry. A real Oloroso Sherry cannot be sweet and must be served at a temperature of 18-20 degrees, never cold!

It was born as Fino and then for one reason or another the flor decays. At this point, it is no longer aged with the solera method and is fortified up to 18 degrees. In this way its aromatic outfit, the aromas remain more pungent and fresh, but the structure is amplified and the oxidized notes emerge with more vehemence. We are talking about a unicorn, 100,000 bottles produced against a total production of 20 million. But if you find one, buy it: it is a sumptuous compromise between Amontillado and Oroso, but we know that perfection lies somewhere in between.

They are produced from Pedro Ximénez grapes and never with Palomino. They are rich and velvety wines. The grapes come from their northern cousins ​​from the D.O. Montilla-Moriles, himself producer of Sherry, even if it is no longer possible to call him that way.

The wine is cured with must and alcohol to become softer and more pimp. You will certainly not find masterpieces in this category, on the contrary …

Even before the Romans, the Phoenicians produced excellent wine, then the Romans came to refine the techniques with their rural experience, but it was only in the 1400s that Sherry became famous. Let’s not forget that nearby Cadiz was the port from which Columbus and Magellan left, so the whole Spanish fleet has always drunk Sherry, indeed it is a wine born to explore the world. At the time it was called Sack, from the Spanish sacred, “bargaining chip”, the wine made immortal by Shakespeare and which once again made the fine palates of the English people fall in love for centuries, before the arrival of Port wine.

From the expense report for setting up Magellan’s fleet, we discover that one of the biggest expenses is that of Jerez wine: in practice, the good man spent more on Jerez wine than on cannonballs, gunpowder, muskets and weapons. . Matters of priority in life …

Fino is fabulous with seafood, paella, grilled fish or on its own as an aperitif. L’Oloroso is full-bodied and structured so dare: it is excellent with chocolate mousse, pear and chocolate tart, strawberry and white chocolate cheesecake, dark chocolate banana bread, tiramisu.