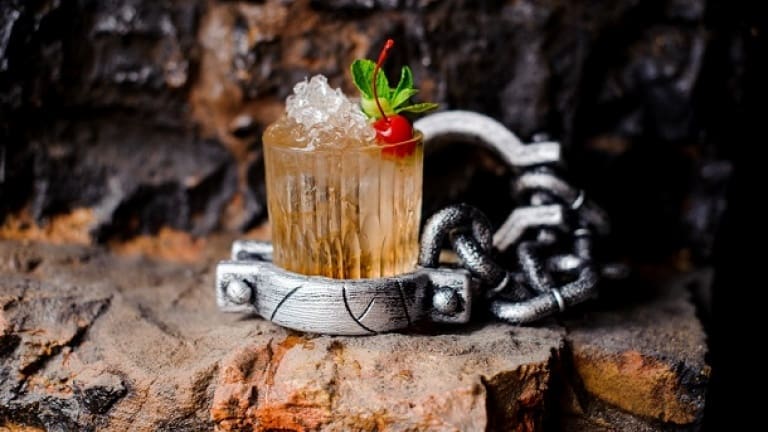 The Navy Grog cocktail is an alcoholic bomb based on three types of rum, lime juice, honey, invented by the legendary Donn Beach, the brilliant bartender who revolutionized the world of mixology, starting the tiki movement.

Navy Grog is one of the great tiki drinks, a pirate cocktail, fresh, aromatic, but heavy as a hammer in the face, the taste is exquisite, no question, but remember to drink in moderation. In all there is 9 cl of rum, it is not light at all, but if you feel like a real pirate and have good guts go ahead.

The Navy Grog cocktail, as the name implies, takes inspiration from the old grog that served in the English navy in the good old days of Vice Admiral Edward Vernon, who in 1740 invented this drink to restore sailors. Grog has now become a winter drink served hot with spices, boiling water, sugar, and lemon, but once upon a time, people weren’t so subtle.

But the good Donn Beach goes further, starts from a classic idea and expands it, amplifying the aromatic charm of the rum by mixing a light Cuban or Puerto Rican rum, a dark Jamaican rum, a strong and enveloping rum such as Demerara and then adds juice grapefruit, lime, and honey. Ancient, but at the same time irreverent, projected towards the future. It becomes an iconic drink served in his restaurants and even the good Vic Trader borrows the recipe and modifies it again. But what we give you is version 1.0 of Donn.

Ingredients and doses to make the Navy Grog cocktail

How to make the Navy Grog cocktail

Squeeze the grapefruit and lime and strain the juices.

Put the honey and water in a small glass and stir to dissolve.

Put all the ingredients in a shaker with crushed ice and shake well for 15 seconds, then pour into a glass full of crushed ice. Serve one of the strongest and most sumptuous cocktails ever made.

Rum cocktails you should try