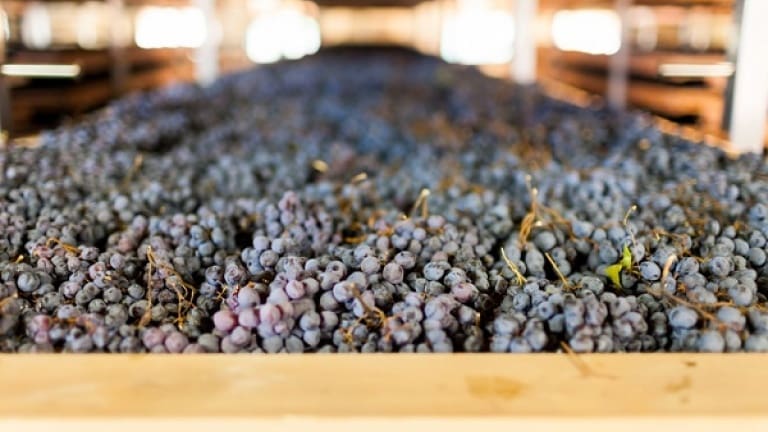 Ripasso is a very particular wine produced in Valpolicella, the hills around the city of Verona. We could define it as a cross between the simpler Valpolicella and Amarone since it is made by reinforcing the Valpolicella must with the dried and still dripping marc of Recioto and Amarone.

In practice, the exhausted pomace of Amarone and Recioto is added to the fermenting must. In this way, the pomace still very rich in polyphenols, sugars and flavors can reinforce what would be a simple Valpolicella. An honest wine, but characterized by a structure that is certainly not strong.

This review technique is not only helpful in making wine more fascinating, but it makes us understand how precious wine was once upon a time and how much care was placed in the ritual of production. Ripasso is a wine born from the necessity of recycling. The sharecroppers produced Recioto for the landowners, but they could keep the pomace once the fermentation process was over. And this stuff was very useful to add thickness, color, polyphenols and flavor to a thin wine. It was a very clever and valuable technique since by adding them to the must, it was enriched with alcohol and sugar. In this way, the alcohol content raised, the wine was less perishable and more robust and therefore caloric. And once in the countryside, every energy source was essential to work harder and survive.

And this is how the Ripasso technique has been handed down to this day in Valpolicella. Of course, today, Ripasso wine is studied and refined down to the smallest detail. The pomace is not pressed. There is no need to “harvest” every last drop of Recioto in the grapes. Indeed, Ripasso is often an excuse to produce an intermediate wine for those who find Amarone too alcoholic and heavy. In any case, also Ripasso is a full-bodied wine, fruity and very generous in terms of taste and tannins and it has a fairly long period of aging in wood, even 24 months.

Let’s remember that Ripasso is always the son of Corvina – Corvinone, Rondinella and Molinara so that we will find the classic aromas of black cherry, aromatic herbs and a forest of flowers. Aging in wood ennobles the bouquet with sweet spices, cocoa, vanilla and cinnamon. The almond finish remains.

Ripasso della Valpolicella is a powerful, tannic, savory, fresh wine on the palate, even if the fruit is ripe and already launched towards a fascinating tertiary evolution. The tannins are robust and give structure, persistence and take on the flavors of the roots such as rhubarb and licorice. Consider that it has an alcohol content of 14 degrees, so it’s not a light wine, even if we don’t reach the intensity of Amarone.

If we compare Ripasso and Amarone you will notice a big difference: structure and freshness. Ripasso is basically a dynamic and not too opulent wine, the pace remains smooth, it never flows into the majestic richness of Amarone. Since the grapes are not completely dried, they have less sugar, less fatty tones, but the appeal of the mellow decadence of Amarone is there.

So, if you don’t like the fullness of Amarone, you might find in Ripasso della Valpolicella a fascinating wine, especially if you have never tasted Valpolicella wines. You can move on to more demanding wines at a later time.

We are talking about a velvety, warm, spicy red wine, with powerful tannins, so it is better to combine rich, meaty dishes such as lamb kebabs, gnocchi with Bolognese, hamburgers, baked lasagna, truffle risotto, pasta Amatriciana .