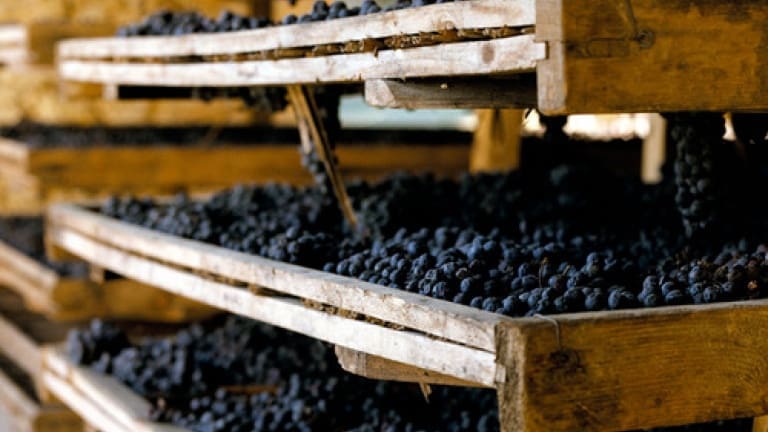 Amarone Della Valpolicella is one of the most sumptuous and opulent red wines you can find anywhere in the world, a jewel that has made Valpolicella and all the hills around Verona one of the most popular destinations for all wine lovers. It is a pretentious statement, but few wines boast such intensity and elegance, and that has helped shape the territory and the success of so many wineries.

All thanks to the arele, the mats on which the grapes are placed for drying, which can last up to four months. Withering that concentrates and amplifies sugars, aromas and flavors. But beware, Amarone is indeed a sweet wine and the sugar concentration is very high, but then all the sugar is transformed and the wine is a red passito, but completely dry.

Which grape varieties are used to produce Amarone wine

But first of all let’s say from which vines, proudly indigenous, Amarone comes from: there are mainly two, namely Corvina 40/80% (and/or Corvinone no more than 50%) and Rondinella (from 5% to 30%) to which alongside other autochthonous vines of Valpolicella such as Oseleta.

How Amarone wine is produced

Let’s go back to the production process of this jewel of Italian enology. The bunches, after the drying period, are (re) selected and then pressed and the must is ready, which begins to ferment and then will be left to rest in wooden barrels. But given that the pressing of the grapes takes place in the middle of winter, January and February, the cold temperatures allow a long maceration, which results in greater complexity and extract, which, however, is followed by a longer refinement, since it takes time to sculpt all this matter. And from here we take a step back …

History of Amarone, how was it born?

Valpolicella, which we remember in Latin meant valley of many cellars, has always been famous since before Roman times for its sweet wine, the Retico wine, the current Recioto. A sweet and harmonious, full nectar, produced precisely with the drying of the bunches.

But in the early 1900s, there was a transformation.

You have to think that before modern temperature control techniques, it was the seasons that started (with heat) or stopped (with cold) the fermentation in wine.

Why is it called Amarone?

Legend has it that by chance, perhaps due to a mistake or due to a hot winter, the entire fermentation process took place in a Recioto tank, thus transforming a large quantity of sugar into alcohol, giving life to a powerful and vigorous wine. , but bitter and very tannic, totally different from Recioto and so they decided to call it Amarone. And the name says it all, from the sweet wine Recioto par excellence, this dry wine was born, with tasty but strong tannins and therefore with a more marked bitter component.

Amarone is an alcoholic wine, very full, perhaps not suitable for all palates, but with a unique charm, due to its structure and the intensity, it can achieve.

The color is very intense, ruby ​​with garnet streaks, which then evolves into garnet over the years.

The bouquet is broad with berries and black fruit, dried flowers, anise, licorice and returns of sour cherries in alcohol with a spicy and earthy finish based on walnuts and hazelnuts. Over time it develops ethereal and spicy scents with cinnamon and cardamom, tobacco and nutmeg.

In the mouth it is dense, it expands warm and very soft, spicy, full of chocolaty notes, certainly not vertical and never very sharp, but rather with round fruit and good flavor. The wine is intense, full, very structured and with powerful tannins, which is why it is a wine that needs a few years to develop roundness and balance. Many Amaroni begin to express all their elegance only after 10 years, so be patient with this wine, trust him and he will be able to reward you with great joys.

Where is Amarone wine produced?

Throughout Valpolicella, the hilly area located north of Verona, between Lake Garda and the Lessini Mountains, which act as a barrier against the cold north winds. These hills, once a renowned holiday area of ​​the Veronese nobility, have turned into a real paradise of vine and wine, thanks to the industriousness of the winemakers and the uniqueness that distinguishes Amarone wine.

Amarone is a heavyweight, a wine that gives its best with important meat dishes, stews, braised Amarone, roasts, baked lasagna, gnocchi with cheese.

It is a great wine for barbecue lovers because of its excellent spicy outfit to combine with the sweetness/smokiness of many dishes such as pulled pork, ribs, grilled glazed ham, but also try it with black truffle risotto, Passatelli with Parmigiano fondue and truffle, bucatini all’amatriciana, roast beef, gnocchi.