Champagne wine guide: vines, history and characteristics of the most famous wine in the world 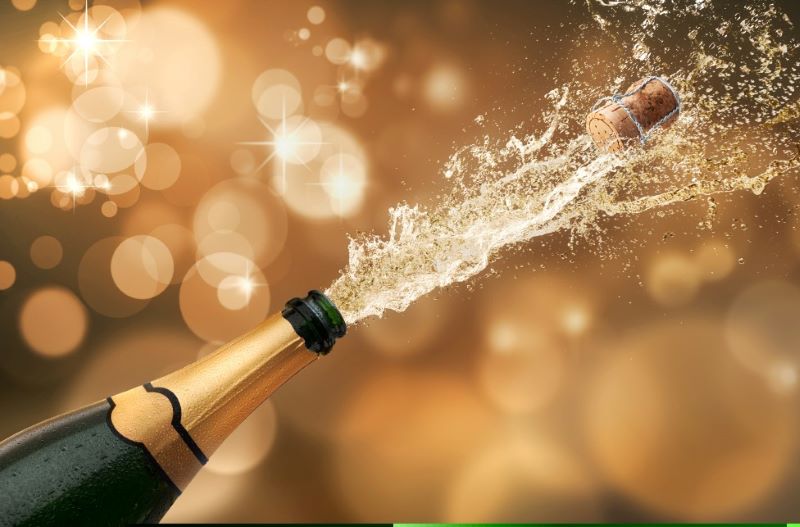 Legend has it that the Champagne wine was invented by Dom Perignon, a Benedictine monk of the abbey of Hautvillers. In reality, the famous monk hated this wine, which he considered defective, and fought for his whole life against sparkling wines, indeed all his efforts were aimed at producing great Pinot Noir, vine present in the region since 1400.

But what is exactly Champagne?

Today Champagne is an elegant and refined sparkling wine that comes from a second refermentation in the bottle, aided by yeasts and added sugar, but at the time of Dom Perignon they tried to avoid refermentation, simply because there were no possibilities to tame the wine, the bottles were too thin and the caps were not strong enough.

Let’s look more specifically at the production process of the Champagne. The grapes are harvested in advance, when they are not completely ripe, but still rich in acid since it is the freshness that is sought. Then the grapes are pressed, the must is fermented and the second phase is passed, that is to say, the assembly of the cuvées. The wine is assembled, the various parcels of the vineyards are mixed to find the right balance and it is possible to add older wines, the so-called “base wines”. Each winery and each producer choose to mix young wines with more mature wines to find balance and make younger wines less tangle, but there is no rule: everything is dictated by the sensitivity and style of the vigneron. Then you just have to add sugar and yeasts, which in slang are France liqueur de tirage, and the wine is bottled.

What is the liqueur de tirage for?

Thanks to yeasts and sugar, a second fermentation is started, called refermentation in the bottle: the yeasts consume sugar, turning it into alcohol and carbon dioxide and then they die.

The refining phase sur lie, on the yeasts, is this, a slow evolution of the wine, but absolutely not controllable by man, the bottle is corked and so the aging on the yeasts is one of the most important phases and delicate too: the wine matures in contact with the yeasts, which give the wine flavors, aromas and depth. The classic aromas and flavors of pastry, beer, yeast, bread and custard come from these yeasts that have indelibly, and beautifully, marked the wine.

But then there is the problem of the deposit, the dead yeasts would make the wines turbid, but with the technique of remuage, invented by Madame Clicquot in the early 1900s, today our beloved Champagne wines are crystal clear and pure like diamonds.

What is remuage in the Champagne production cycle? 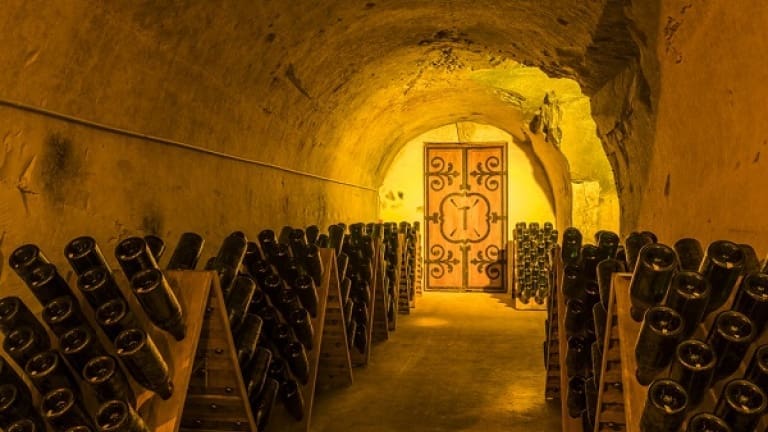 The remuage is the most evocative step in the production of Champagne: the bottles are placed in the pupitres, simple easels, but in French, it sounds all better and so poetic, head down, inclined at 45 degrees. Every day a master cellar worker rotates the bottles half a turn twice so that the deposits in the wine gradually reach the cork.

Now we proceed with the disgorgement: the neck of the bottle is frozen and is uncorked, thus causing the impurities to escape.

What is the liqueur de expedition?

The top-up phase is fundamental, where other wine is added, the liqueur de expedition, or other sugar and reserve wines, always coming from the same cellar and which can also be 20 years old and more. A curiosity: in a bottle of Champagne the wine is at a pressure of 6 atmospheres, so be careful when you open it and don’t point it at other people.

But why is the liqueur de expedition added? To dose, the wine, to shape it, “sweeten it” and transform it to your liking and create your own perfect wine recipe. Because the big Maisons want to create bottles of constant quality, regardless of the harvest: Champagne is a precise and measured symphony, nothing is left to chance. And the sum of the parts is always greater than the parts themselves.

Certainly, there are the vintage Champagne, where only wines of the same vintage are used, but they are rare cases and only happen in exceptionally favorable years.

There are also Pas dosé which are purer wines, where no sugars are added but only reserve wines, and many, especially small producers, are focusing on more intransigent and less processed Champagne. 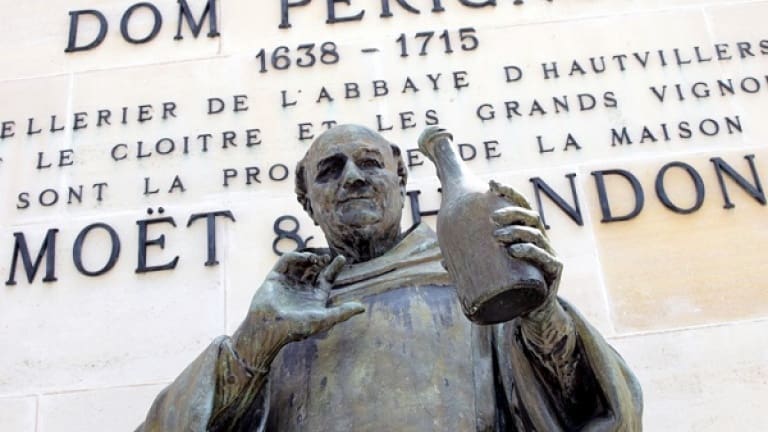 Well, this is broadly the methode champenoise, but as said, it is not to be attributed to Dom Perignon, indeed! Once again were the British who started the Champagne craze. From avid consumers of wines from Champagne, they bought whole barrels of wine and transported it to England, but then with the arrival of the warm temperatures of spring the wine started to ferment a second time and developed a certain natural effervescence. Pay attention, we are not speaking about the 6 atmospheres they have today, but rather to a light and delicate perlage. So the birth of this wine was totally random. An amazing case of wine serendipity.

Champagne immediately became a legend, the wine of the upper classes and so the production of this strange wine was perfected and after about thirty years more robust bottles were created that could withstand the pressure.

It seems trivial, but the birth of stronger bottles allowed Champagne producers to rationalize and bottle the wine and then add sugar and yeast to make the effervescence more intense. But above all in this way, the wine could rest in the cellar on the lees before being sold. In this way, the complexity of the wine was exponentially enhanced.

But the question is: why is Champagne a unique and unrepeatable wine?

A matter of terroir, of course. The climatic conditions are unique, it is only the influence of the sea that mitigates the harshness of winter in this region of extreme latitude, so much so that Champagne is the most northern wine region of all, at the limit of the survival of the vine. The cold and the temperature range help to develop acidity and aromas in the grapes, favoring a slow and constant sugar maturation: consider that the average annual temperature is 10 degrees centigrade.

And then there is chalk, a large part of the Champagne soil (75%) is made of real limestone blocks, which in French is called Craie. And this so particular soil gives crazy minerality, finesse, and structure to the grapes, not to mention that during the day it manages to capture the heat of the sun and release it during the night, providing thermal help to the vineyards.

The Marne, the river that cuts across the region transversely is another important element and acts as a thermal regulator and marks the most valuable area for the vineyards so that all the most important cities such as Epernay, Ay, and the same Hautvillers.

But the chalk has also allowed the construction of cellars dug into the rock, excellent for preserving the wine with the right humidity and low and constant temperature, essential for keeping the refermentation under control and preventing the bottles from exploding.

Obviously, the man, the winemaker, is also a fundamental part of the equation: as we have seen, the champenoise method is revolutionary, an absolute novelty. But equally as revolutionary were the discoveries of Dom Perignon, the first to defend the concept of assembling the cuvées of the various vineyards. He had guessed that mixing the same grapes, but of different vineyards, helped to balance the wine, so much so that from the simple taste of the grapes, he composed the wine, before it was pressed.

As you can see Champagne is deeply bound to its land, the method has been replicated with some success also in Italy and Spain, but only here such unique features have been distilled into an immortal elixir. 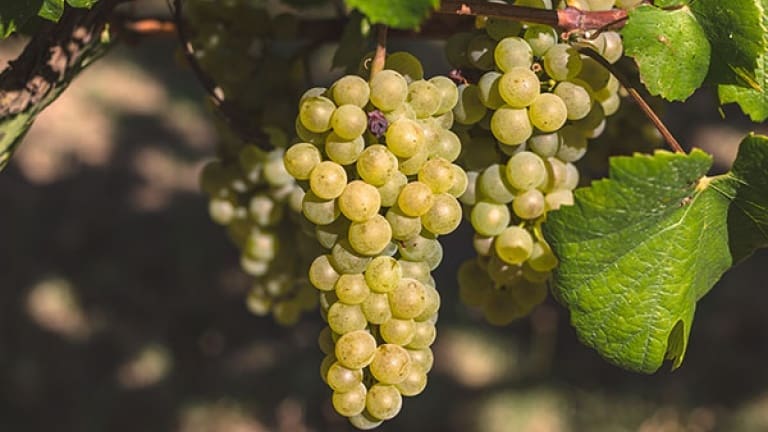 Pinot Noir, Pinot Meunier, and Chardonnay, often found in blends with variable ratios, but Pinot Meunier is used less and less, is the least fine of all, but adds roundness. Not to mention that it is considered a life preserver, as it matures before the others and does not present major management problems.

Pinot Noir is the absolute protagonist, the most nervous and pungent, and is vinified both in white and rosé. Champagne made only with Pinot Noir is called Blanc de Noirs.

Chardonnay is the opposite of Pinot Noir, it is creamy, warm, and with dried fruit and not ending. If Champagne is produced with only Chardonnay it is called Blanc de Blancs.

Champagne is located 149 kilometers southeast of Paris and is a relatively small area, with a vineyard area of ​​32,000 hectares. The heart of the region is Epernay, just south of Reims Mountain. The most famous fashion houses that are based here are: Moët & Chandon, Pol Roger, Mercier, and Perrier-Jouët.

The other capital is Reims, which marks the northern border, a historic city, the oldest where some of the oldest fashion houses like Krug, Ruinart, Tattinger, Luis Roederer, Palmer, G.H. Mumm, and Heidsieck Monopole.

The elective area of ​​Pinot Noir is to the west, in the Marne Valley, while the Chardonnay dominates throughout the Cotes de Blancs and even further south in the Cote de Sèzanne. Other villages to consider for the goodness of their wines are Avize, Oger, and Cramant.

How many degrees does Champagne have and at what temperature should it be served?

Usually, it does not have more than 12-13 alcoholic degrees, since it tends to produce intense, savory, acidic wines, but never too alcoholic. The ideal service temperature is 8 degrees Celsius, never forget this detail. The low temperature increases the perception of acidity, the main characteristic of this sparkling wine, so enhance it, not to mention that a hot Champagne would be clumsy, pachydermic and even the bubbles themselves would be coarse.