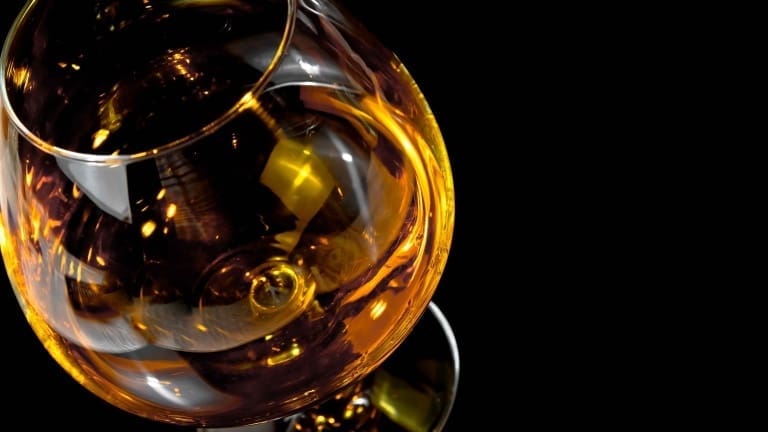 Cognac comes from the double distillation of wine and is one of the most sumptuous and elegant spirits you can drink.

It is one of those virtuous cases where product and terroir coincide, in fact, this famous French distillate takes the name of the city where it was born: Cognac, in the Charente region, not even 130 kilometers north of Bordeaux.

To tell the truth, it can also be produced in the Charente-Maritime, in part of the Dordogne and the Deux-Sèvres, but the heart coincides with the cities of Cognac and Segonzac. Just where the Dutch used to stop, after going up the Charente River, to buy salt, wine and timber.

But the wine they bought deteriorated quickly, it could not stand long journeys, we are in 1620 and at that time the Clarets, wines not really long-lived, were in fashion. And so the Dutch, who had already invented Genever in the early 1600s, taught the inhabitants of Cognac the art of distillation and thus the myth of Cognac was born.

But what is so special about Cognac and why is it so prized, loved and revered, so much so that it is protected by an AOC? After all, it’s just a brandy like many others, a different twin of Armagnac…

Everything contributes to the production and perfection of Cognac: the wood of the barrels where it ages comes from the nearby woods of the Limousine, the historic cellars that have the right temperature and a perfect degree of humidity to help the cognac breathe, the breezes that come from the sea ​​and then there is once again the chalk. 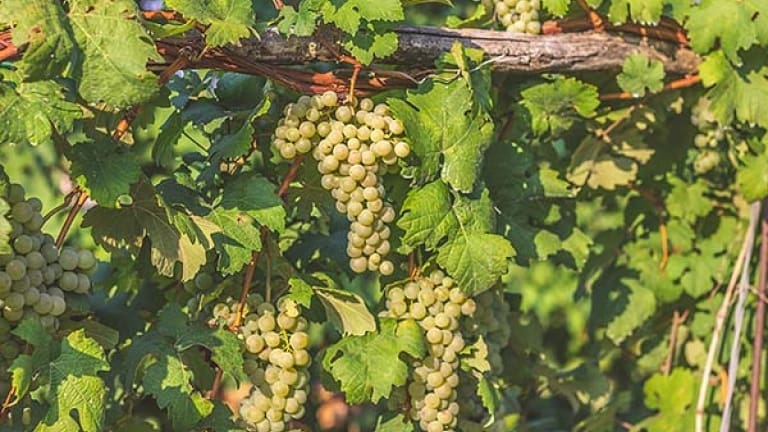 The lands where Ugni Blanc (the mythical Trebbiano you can find in Italy too), Colombard and Folle Blanche are planted are mainly chalky. Yes, exactly, just like for the most prestigious Champagne and Sherry crus. It is the gypsum that makes the difference, that gives texture and flavor to the base wine. Or rather: the more chalk there is in the earth, the more elegant and majestic the distillate becomes.

But the French love transparency and dot the i’s and in this case the classification work of the crus is painstaking, certainly not comparable to the Italian doc.

Cognac and Segonzac are the epicenter of finesse and the highest expression of Cognac and are found in Grande Champagne, a small protected oasis, characterized by a perfect microclimate. It produces the best Cognacs, endowed with unique finesse, thickness and incredible floral aromas, citrus fruits and highly evolved and mature notes of infinite persistence. The land is characterized by the presence of gypsum and fossils.

La Petit Champagne: a semicircular area south of Cognac that still produces extraordinary spirits, with peaks of excellence that rival the Grande, still floral and fine, but less persistent.

La Borderie: the smallest area, just above Cognac. It produces refined spirits with still a sumptuous and penetrating floral bouquet and clear and distinctive hints of dried fruit. They age much faster than the others and therefore their evolution is already advanced when they are bottled. In this area you can make excellent purchases, there are excellent quality spirits but at very affordable prices.

From here on, the regions spread like wildfire around the heart of Cognac.

How is Cognac made?

The base wine must be low in alcohol, absolutely non-aromatic, with an alcohol content between 8 and 10 degrees and not contain sulfites.

The grapes are harvested well in advance so that they have strong acidity and then they are fermented for about twenty days. But don’t think about a drinkable wine, it is a sort of acidic, undrinkable and immature mixture that will then be distilled. It is very similar “as a base” to the wort, the first fermented malt liquid used to distill whiskey, the procedure is very similar.

Another fundamental element is the Charentais alembic, made of copper so as not to alter flavors and aromas and conduct heat without jolts.

The wine is placed in the boiler, which usually has a capacity of 12 hectoliters, in contact with the fire, it is heated and thus it is transformed into vapors. Vapors that rise and sneak into the so-called swan neck and pass into the chauffe vin (wine warmer) and finally into the cooler, where it returns to the liquid state.

But this is only the first distillation, which produces brouillis, a cloudy liquid that reaches 30 degrees alcohol at most. A second distillation is needed, the bonne chauffe, which can last up to 12 hours. Do not think of a river of distillate, the final product falls almost in drops.

And it is during the bonne chauffe that the distiller chooses how, where and when to cut the heads, which are unpleasant aldehydes, sulfur dioxide and methyl alcohol, but which evaporate before the alcohol and the heads, the heavier substances. Obviously, heads and tails do not jump, they still have precious alcohol and so they are added to the next chauffe and redistilled.

Aging of Cognac in cask: the secret ingredient 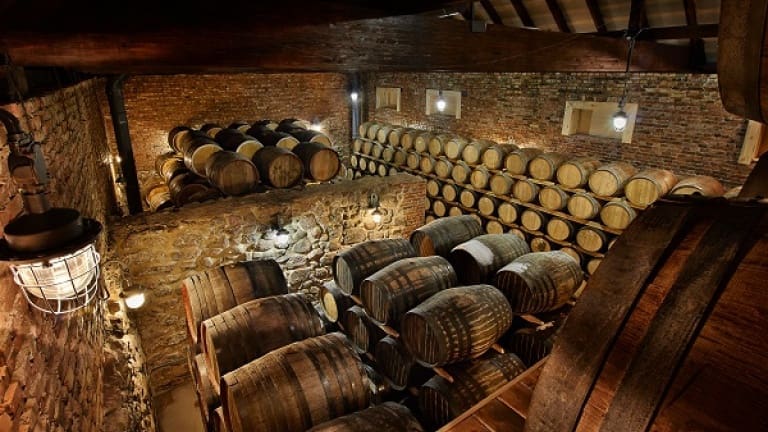 However, the distillate that comes out of the still is not Cognac yet, it needs the aging phase in wood, which must be at least 2 years old. The wood comes from the forests of Limousine and Tronçais. The finest Cognac is placed in good wood, the less toasted one so as not to ruin it with excessive smoking. It is not easy to find the right wood, because at first, you need a more incisive wood that releases tannin and color, then it must only act as a container for aging.

And consider that Cognac loses about 4% of volume in barrels every year, certainly, it refines, rounds off, loses alcohol and the most pungent notes: it is a necessary process, as important as distillation. And the cellars of the Charente are perfect, on the ground floor, where a good humidity creates the optimal conditions for the maturation of the distillate.

The assembly of Cognac

Cognac has no vintage, like brandy, apart from a few rare cases resulting from a unique vintage. But we are talking about events that are more unique than rare. The age of a Cognac is given by the youngest distillate present in the blend.

This is why the final phase of blending the various Cognacs is fundamental, it is a recipe within the recipe. The cellar master is the one who chooses the cuvées and models them until he finds the product he wants or that has made the maison famous.

The aging of Cognac 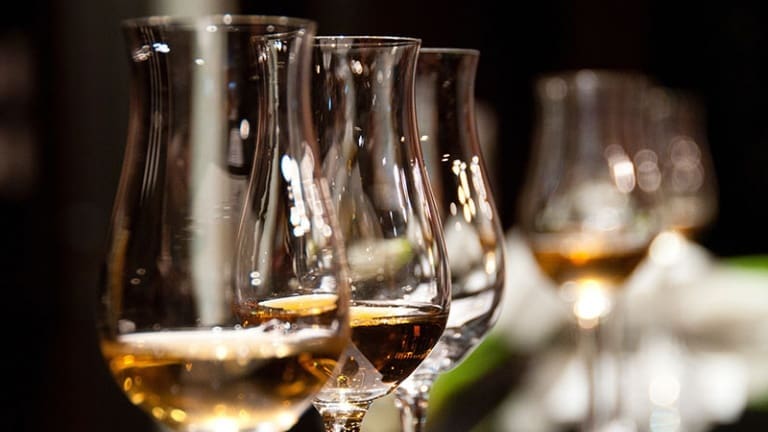 Attention, the age of Cognac is given by the years spent in wood, when it is bottled its maturation stops. So a 50-year-old Cognac has spent 50 years in wood, the period in the bottle is irrelevant.

There are three classifications to designate Cognac based on age.

Three Stars, V.S. (Very Special), Sélection, de Luxe: the first step, a young Cognac of at least two and a half years is cut with more mature spirits of 5-10 years (usually).

V.S.O.P. o Réserve: Very Superior Old Pale is a Cognac where the youngest distillate has aged in cask for at least 4 and a half years. And here we start to get serious, complexity, roundness and sumptuousness are more evident.

XO or Napoleon: the youngest Cognac has a minimum age of 6 years.

Hors d’âge: they are Napoleon as a denomination, however they indicate particularly valuable products, refined for up to 50 years.

Excellent to accompany spoon desserts, chocolate, bread cake, tiramisu, apple pie, trifle, kunefe, baklava, chocolate salami, galaktoboureko, but it is also perfect as an ingredient to flavor the desserts themselves.