Old Fashioned cocktail: recipe, ingredients and history of the most loved cocktail of all time

The Old Fashioned is a cocktail for serious drinkers, accustomed to the flavor of the whisky, like Don Draper of Mad Men. His full name is Old-Fashioned Whiskey Cocktail, and it comes from the fact that those who ordered it asked for a whiskey in the old way.

And the old way is and should always be like that: a lump in the glass, two drops of Angostura, a bit of soda to dissolve, some muddler pounding and then add the ice, you let the whiskey come in, mix well but gently and squeeze a lemon peel over the cocktail and then you can decorate with a maraschino cherry, a slice of orange and lemon peel.

There aren’t any fruit juices, syrups, or liqueur like triple sec or maraschino to sweeten the pill, just a man and his whiskey to the old way. It’s no coincidence that during Prohibition, the bartenders used to pound a lemon peel with sugar to disguise the flaws of the moonshine.

We are talking about a pillar of the history of mixed drinks, one of the oldest cocktails, born towards 1800, along with the Sazerac, different for the ingredients but with which it shares the same preparation, or should I say the same ritual.

Because you should never use syrup sugar, only simple sugar, it takes longer to prepare it. Unless you want to customize your syrup with some particular ingredients, but that’s another story.

The appearance of the Old Fashioned cocktail is minimal, of a unique, silent elegance: it has an amber, intriguing color that hypnotizes your eyes, filled with an ice crystal, from which peep a cheeky slice of orange and Solomonic lemon zest.

A masterpiece of intense flavor, enhanced by the balsamic flavor of Angostura, which supports the spiciness of the whiskey and the sweetness of the lump, dozing in the background. This cocktail is so famous and memorable that the glass used has also taken its name.

Ingredients of the Old Fashioned

How to prepare the perfect Old Fashioned

Put the sugar cube in a glass and drop two tears of Angostura and a dash of soda. Pound with the muddler to dissolve sugar, capturing the essence of Angostura. 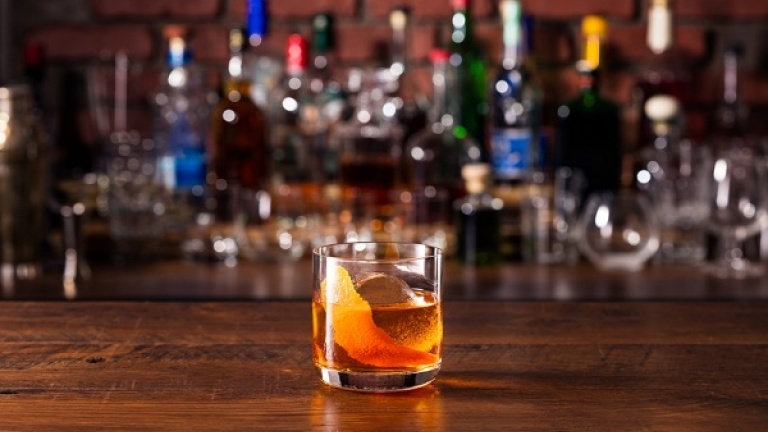 Fill with ice and pour your favorite whiskey, which can be scotch, bourbon or rye. Garnish with a slice of orange or lemon peel or a maraschino cherry.

History of the Old Fashioned cocktail: when was it born and who invented it?

We are talking about a pillar of the history of the mixology, one of the oldest cocktails, born at the end of the 1800s, together with Sazerac, different in ingredients but with which it shares the same preparation, or it would be better to say the same ritual.

The cocktail is born with whiskey and is closely linked to the life and eating habits of the United States: the step from whiskey on the rocks to a whiskey cocktail flavored with two drops of bitters and sugar is short. As evidence of this, the first written definition of cocktail that can be found in the United States is reported by the newspaper Balance and Columbian Repository of 1806: “A stimulating drink, made from any distillate, sugar, water and bitter.” And coincidentally, as identikit corresponds to Old Fashioned and Sazerac.

If we want to talk about the first real Old Fashioned, we have to wait for the publication of the bible by Jerry Thomas, the legendary How to Mix Drinks, or The Bon-Vivant’s Companion manual. Even though his first incarnation was known as the Whiskey Cocktail and was made with two drops of Boker’s bitters, a bit of gum arabic syrup and a glass of whiskey.

From that moment, it was a flourishing of variations: gin, cognac, sherry, and garnish and fruit began to invade the glass. The whiskey cocktail was (and still is!) a lubricant of social relationships, an excuse to relax and enjoy time with your friends after work. At one point, it was so “famous” that it was recommended as a morning drink, a medicinal tonic to fix the stomach, the same function also recognized to Mint Julep, a very close relative.

The Old Fashioned becomes the official cocktail of the United States

In an article of the Memphis Daily Appeal of 1859, the Whiskey Cocktail was defined as a “fashionable cocktail,” a companion to gentleman’s evenings, the cocktail for important occasions.

However, the drift of the variants led to a degeneration of the cocktail, and some purists rebelled. They almost made it a question of national health. The Whiskey Cocktail had to be drunk the old way, but not because of virility or patriotic love, but for the simple fact that the Whiskey Cocktail had become so sweet that people didn’t drink it anymore. It had become a pantomime of itself.

It was Leander Richardson, in a piece called “The Cocktail of To-Day” in 1886, that created the legend, contrasting the new cocktails with the old-fashioned ones. The piece caused a sensation, so much so that the Whiskey Cocktail became the Old Fashioned Cocktail.

Whisky cocktails you should try