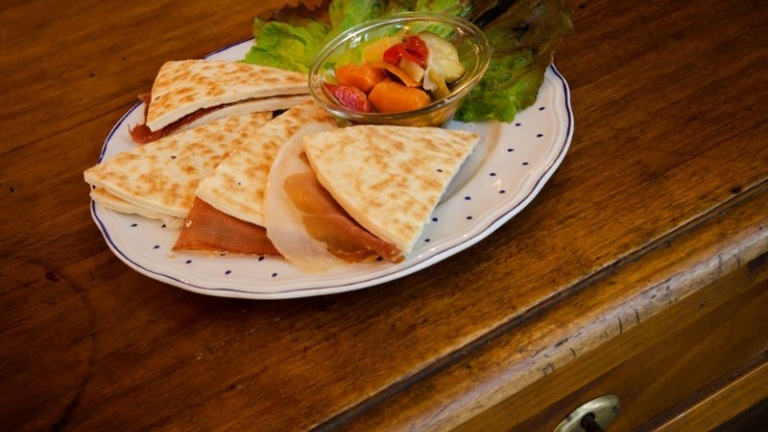 How to prepare Piadina Romagnola: the original recipe of the Italian flat bread

Piadina (Italian flatbread), also known as piada or piè in the local dialect, is one of the great treasures of Italian cuisine. And this leads us to ask a question…

Piadina is the typical street food you can find in Romagna, it’s like a tortilla, a pita, or a naan, but not leavened. You can find it filled with salami, ham, cheese and arugula, fish, grilled sausages and caramelized onions, and of course mortadella.

Its origin dates back to the dawn of time, and still, the Romans ate a kind of ante litteram piadina, but this shouldn’t wonder you, after all, piadina is nothing but a delightful, magical mixture of flour, water, and lard.

But in Romagna, this dough has become something more, an art that we could say was perfected.

It was once the bread par excellence, the food that sustained all the families, born from the peasant tradition. And here’s the catch, its natural simplicity, its jovial and open nature, especially if you put on it some cured meats or another amazing culinary product of Romagna: the Squacquerone cheese.

Style, texture, and crunchiness of piadina change from city to city, even from house to house, (each family has their own grandmother’s recipe in the heart), and gradually as you get closer to the sea, traveling along the Via Emilia in a journey of taste, piadina becomes increasingly thin and crispy, until it reaches the beaches of Riccione, where is thin no more than a couple of millimeters.

If you want to try all the piadina from Romagna, you will need a lot of stops along the way, but if you prefer to make piadina at home, here is for you the original recipe of a great Romagna “azdora”, with his valuable advice. Adzora is an old and complex dialect word that means, the matriarch, chief in the commander of the kitchen operations, a kind of “Angel in the house”, without the negative meaning of the term.

So, after all this talking, are you ready to make the perfect piadina like a pro?

Ingredients for making the real piadina from Romagna (for 10 servings)

How to make the perfect piadina

Place the flour in a big bowl, add all ingredients and mix vigorously until you get a compact, smooth and soft dough. Add the milk slowly, gradually, the minimum required to make the dough elastic.

Let the dough rest for at least an hour wrapped with film or inside a bag for the freezer, make some balls, sprinkle some flour, lay them out with a rolling pin, and cook on the “testo”, but a simple, super hot thick bottomed pan will do the trick. We will talk about “testo” later, so don’t worry.

That’s all, but you’ll need a lot of practice to make a really good piadina, the secret is not the recipe, but the ingredients.

The advice of the azdora to make the good stuff

Flour is the most important ingredient when preparing piadina. If you want to become the Lord of piadina you have experimented with flours: sniff them, taste them, mix flours, and above all look for real stuff like stone-ground flour, spelt flour, Kamut. Avoid industrial products and try to find a trusted supplier, until you find the perfect flour. The rest comes by itself: there is no definitive recipe, so take it easy.

The cooking method, or better the tool is another key point in the quest for the perfect piadina. During this process, the cooking tool must absorb the water from the dough, so to make it crumbly and not “chewy”. We use Montetiffi pan, also called “teggia” or “testo”.

This instrument, made entirely by hand, has a round shape with raised edges and the material that is used for its realization is a mixture of different types of clay that makes them unique. 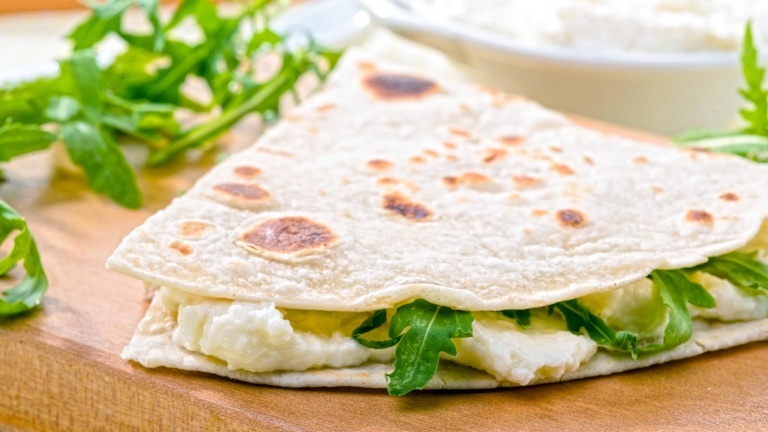 A piadina cooked in this pan has different flavors and aromas, if it is used since Roman times there is a reason! But also a normal clay or stone pan is ok; if a are desperate use a thick bottomed pan.

It all depends on what you want to put inside your piadina. If we have a plate of cold cuts with cheese and pickles, as dictated by the local Romagna tradition, choose a light, fragrant red wine, like a Sangiovese di Romagna or a salty sparkling wine like Barbera.

If you are going to eat a piada with squacquerone or soft cheese the choice falls on a floral, mineral, white wine like Pagadebit DOC of Romagna or a delicious Rebola from Colli di Rimini. Prosecco Superiore di Cartizze is always a good companion.

For the most mouth-watering pairings such as piadina with onions and sausage do not hesitate to uncork something like a peppery Syrah from Cortona or a spicy Trappist beer or a rocky Fumin from Grosjean winery.

If you want to pair a cocktail, a good all-around drink is Spritz.