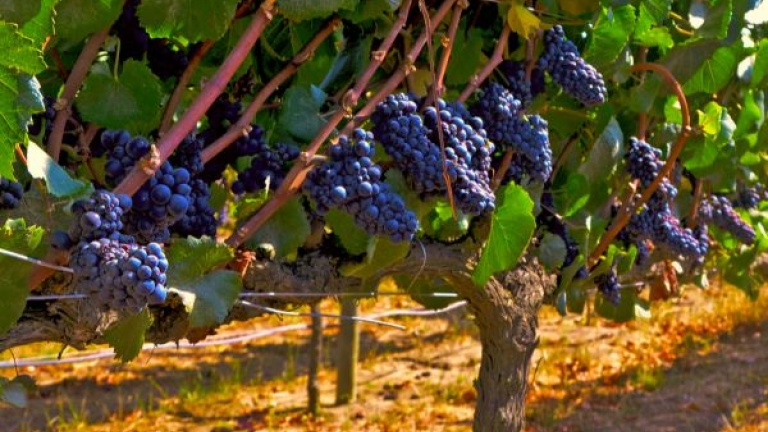 Carmenère is a French red grape variety from which splendid, sumptuous, warm and enveloping wines are obtained. It is one of the most popular grape varieties by enthusiasts, but also by the general public, thanks to its ductility and innate elegance that results in wines with a fleshy charm, with amplitude, velvety fruit and great aromatic depth.

But it is also a vine that has traveled all over the world alongside immigrants in the early nineteenth century when the great migrations to Latin America began.

History of the Carmenère grape

The vicissitudes of this wandering vine are fascinating. Like most of the Bordeaux vines, such as Merlot, Cabernet Franc, Cabernet Sauvignon and Malbec, it derives from a selection of the legendary Vitis Biturica cultivated by the Celtic tribe of the Bituriges. And until just before the plague of phylloxera, Carmenère was one of the historic vines of the Bordeaux area. It was certainly not a protagonist, it was used like Petit Verdot to give color, aromas and an elegant look to Bordeaux blends, but let’s say it lived in Olympus. Due to its slow maturation and since Bordeaux wines had to be put on the market first and it was not reasonable to risk aging too long, he was gradually expelled from Eden. And so Carmenère fell into oblivion and was practically considered extinct. But let’s go back to migrations in South America: in Chile to be exact. In the mid-nineteenth century, the first vines were planted just outside Santiago, in the Maipo Valley: mainly Merlot and Pais were produced. But after more than a century, Chilean winemakers discovered through DNA analysis that what Merlot was actually Carmenère. We are in the 70s of the twentieth century and from that moment Chile became the new homeland of Carmenère, just as neighboring Argentina had become the new home of Malbec.

But why is the cultivation of Carmenère so important in Chile? Quite simply because phylloxera never arrived in Chile, since the country is protected to the east by the mighty Andes and to the west by the Pacific Ocean. And this means that the vineyards are ungrafted and that Chile is a precious botanical garden of the original Bordeaux varieties. Not to mention that thanks to this ram, even Chile has managed to find a flag under which to gather, a symbolic wine in which to invest as an image and production. So much so that today Chile is considered the cradle, the area of ​​choice for the Carmenère grape.

The color is very intense ruby ​​red, so much so that it is thought that the name of the wine derives from the word “carmina”, meaning red.

The bouquet is rich, sumptuous, characterized by a fleshy, ripe fruit, framed by spices, aromatic herbs and elegant vegetal notes intertwined with flowers, balsamic scents of resin and powder, rose petals and eucalyptus. Ethereal hints, rhubarb, chocolate and very light smoke (peat?) When it ages well in wood. Reminiscent of Merlot and Petit Verdot, distantly, but after all, they are close relatives. In any case, the density of the aromas, the fabric, the thickness are considerable, even without being “aromatic”.

It is a full, tannic wine on the palate, but softened by a velvety warmth that fascinates the palate, without ever becoming too aggressive or green. As a sip, it is full-bodied and volumetric, but it has pulp and propulsion, it is not a flaccid or boring wine. The tannins are tasty, decisive, and have the flavor of rhubarb, but above all, the delicate vegetable flavors make this noble red wine mottled and varied.

This is the description of an excellent Carmenère, but finding one made to perfection is not so easy, since it is a difficult grape to manage. Carmenère has a slow and very long maturation, low acidity and a tendency to explode like sugars and heat, so finding the right balance is a great oenological challenge. The climate factor helps Chile. The cold currents descend from the Andes bringing freshness and the same goes for the sea breezes, which give minerality to the wine. in the most fortunate cases, with the right altitude and if it is planted in poor soils, Carmenère can become an amazing wine, even if produced in purity. But a strong temperature range between day and night is essential to fix aromas and give finesse and acidity to the grapes. This does not mean that all the production is remarkable, there are also cheesy wines, but there are (almost) never really bad wines, it is very difficult to produce badly in this blessed land. In Chile, you will also find low-weight bottles of decent wines, but banal and faded, because in the plains the yields are high, the work is paid for nothing or little more and you don’t need many treatments.

In Chile, it is cultivated in all the main regions, including the Maipo and above all the Colchagua Valley, the most famous area, the Bolgheri of Chile if we want to trivialize the concept, where the vineyards reach the slopes of the Andes. In Argentina, it is growing very well in Mendoza, even if always in the shadow of the darling Malbec. In Italy, it is produced in Friuli (DOC Lison-Pramaggiore Cabernet) and in Veneto where it intervenes in the Montello Rosso DOCG and also in the Alghero area in Sardinia. It is also gaining ground in Tuscany, especially in Bolgheri, where all the Bordeaux grapes are finding excellent conditions. Also in Lombardy and Veneto for decades Carmenere was cultivated and confused with Cabernet Franc, but then it managed to emerge and today it is a wine that is gaining some interest.

For now, the most interesting, elegant and sumptuous Carmenere we have tasted is the legendary Relogio Ca Orologio 2013. It has body and pulp, lots of juice, but elegance, fullness and a certain austerity that invites you to drink, but also to leave it in the cellar for 10 quiet years. It costs 30 euros, so it is not an everyday wine, but it is not an exaggerated price, since it is a splendid natural or artisanal wine if you prefer, from a biodynamic farm that works with great attention in the Euganean Hills.

Carmenere vs Cabernet Franc: the differences

Cabernet Franc is a lighter wine in color, tending towards ruby. The bouquet is more vegetal and light if desired, less warm, certainly less balsamic. Carmenere has a more intense and dense color. Much depends on the vinification, of course, but Cabernet Franc is fresher and less enveloping, let’s not say severe, but almost, both on the nose and the palate.

We are talking about a full, warm, tannic wine with an explosive fruit: it is clearly carnivorous, it loves grilled meat, Asado, choripan and of course all smoked BBQ preparations, thanks to the assonance with slightly smoky tones.