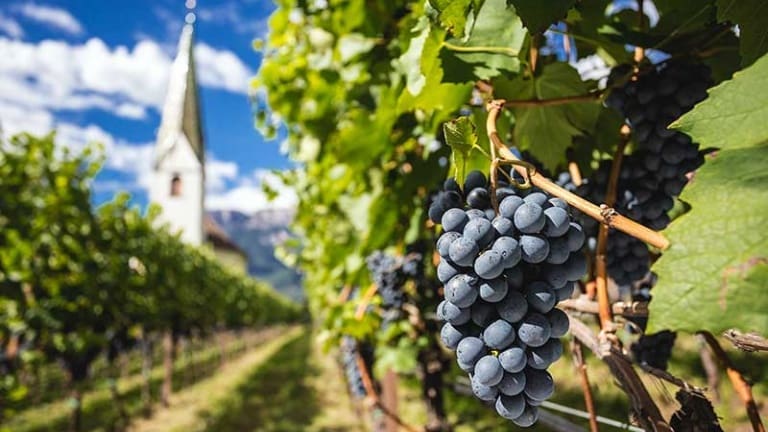 Lagrein is the most characteristic and interesting red grape variety of Trentino Alto Adige (South Tyrol) and it shares the king’s crown with the Schiava. And just as the Schiava, Lagrein was once mainly produced as pink wine, namely the Lagrein Kretzer.

Fortunately, the South Tyrolean winemakers have understood the potential of structure, finesse and longevity of this wine and have embraced the idea of ​​a more sober, focused and technically less invasive (oaked) production.

But it is not a simple undertaking, because Lagrein is a full-bodied, fruity, warm, harmonious wine with powerful tannins, which are tamed by long aging in cask. A process opposite to that of the pink-Kretzer Lagrein, where you look for little color and alcohol and want to make a sharp wine with a slender body.

Not that the rosé Lagrein is bad, indeed it is a very charming wine, excellent also for seafood. The problem was that they produced only the pink Lagrein at the expense of the most important version, which we did not say but is the Lagrein dunkel.

Areas of production of Lagrein

This fiery red wine is produced throughout Trentino-Alto Adige, however, its favorite area is the Bolzano basin, in Gries in particular, where once there was the heart of Lagrein, the vineyards that still belong to the abbey of Gries, from which the Muri-Gries winery.

The history of this noble wine is fascinating. The name first of all: some claimed that it came from the Vallagarina further south, a hypothesis supported by the similarity of the name.

Others favored a Greek descent of this vine, with a classic passage from the city of Lagaria, in Magna Graecia, up to the northern Alps. And it was no coincidence that Lagaritanos was the wine produced in this ancient city.

And though these hypotheses are intriguing, the origin of Lagrein is to be found in France, in Burgundy, in fact, even Lagrein, according to the latest ampelographic and genetic researches, is a son of Pinot Noir, in turn also the father of Teroldego. So Teroldego and Lagrein descend from the same lineage and there are many similarities between the two great red vines of Trentino-Alto Adige.

Anyway, the first official information appears in 1379, when Lagrein wine is mentioned in commercial documents. But Lagrein is much more, it has always been the protagonist of the tables of the nobles and ecclesiastics, it was nectar reserved for a select few.

Today, fortunately, Lagrein is a wine that we find even without plundering the cellars of the South Tyrolean abbeys, and the interpretations are many. However, it is possible to trace an identikit precise enough to recognize it.

Ample, spicy, with berries, cocoa, mushrooms, pepper, sweet spices and lots of undergrowth. Persistence and intensity are amazing. It is not a wine with subtle and hidden aromas, but rather exuberant: a true warrior.

On the palate, Lagrein is tannic, structured, sumptuous, fresh, with sapid hints, driven by powerful, but polished, tannins. Pepper and licorice in the mouth are neat, but they are always accompanied by a warm fruit that wraps around the entire mouth. The best Lagreins deserve slow and long aging in your cellar, don’t drink today 2015 vintage, but at least 10 years of aging are required to fully appreciate its charm.