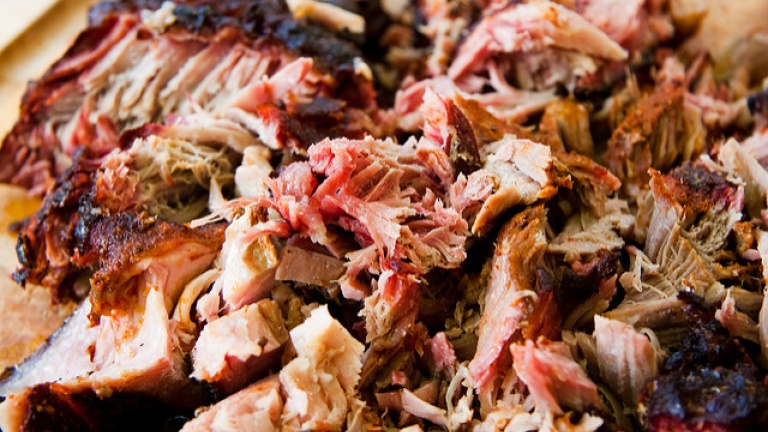 Pulled pork is the recipe that all barbecue enthusiasts must try sooner or later.

There is no escape, it’s a ritual. Let us remember once again that grilling and BBQing are not the same things.

And today, by cooking pulled pork, we will understand the true essence of bbq, which involves slow, indirect cooking, where smoke plays a fundamental role.

We will not use a smoker, but our classic barbecue. Don’t worry, this is a real guide to learn every trick on the perfect cooking of pulled pork on the bbq, we will give you all the details, even the number of pieces of charcoal to use.

The ingredients are not many, they serve pork and of course spices and seasonings for the rub.

To prepare the rub

How to prepare the perfect pulled pork

Let’s start with the cut of meat: pulled pork is made by cooking a part of the shoulder that in the United States is called Boston Butt, that is, the upper part of the pork shoulder. When you buy it, ask for a piece of meat on the bone: it adds a sea of ​​flavor!

The first thing to do is prepare the rub, the seasoning. The rub is a blend of spices that is spread on the meat before cooking and is essential to blend the monolithic taste of the pork. It adds nuances, depth of taste, spiciness. Everyone has their own rub, experiment and find yours.

Ok, let’s go. If you have the spices in the seeds, put them in the mixer and grind them on the spot. Mix all the ingredients in a bowl. The rub can be “applied” just before cooking, but also the night before: your choice. Spread the mustard on the piece of meat, which you will have taken out of the refrigerator an hour earlier. Mustard helps to fix the rub to the meat.

Let’s prepare the BBQ
Let’s move on to cooking or rather setting up the bbq. The key to cooking pulled pork is smoking. Adding the smoke effect to your bbq is very simple. Take a handful of wood chips and soak them in water for at least 1 hour.

I usually use softwood shavings such as maple and cherry. Other smokier or tastier woods can mark the meat with too strong a flavor. In any case, it is a question of taste, experiment and find yours!

Putting the shavings, or even slightly larger pieces of wood in water, is the key to creating smoke, they will burn very slowly, releasing the smoke we need.

But here’s the perfect pulled pork cooking technique. Put about 90 pieces of charcoal in the bbq and then divide them, pushing them to both sides. In the middle, place the aluminum tray with a little water, it will prevent fires from forming that would ruin the meat.

Heat twenty pieces of charcoal, but heat them well, until a gray layer of ash forms on top. Put the embers on the extinguished charcoal.

Add a handful of wood chips to the hot coals. Put the grill on the bbq, close the lid and wait until the smoke starts to come out. It takes 9 hours to cook a 2.5 kg pulled pork, you are warned eh! Keeping the temperature constant for such a long period is not easy and remember to open the lid as little as possible, otherwise goodbye heat and lengthens the cooking time.

How to cook pulled pork

Once the temperature reaches 125 degrees and there is smoke, open the lid and put the piece of pork inside.

The cooking we said is 9 hours, so if you want to prepare it for dinner, also considering the preparation time, start early, otherwise you will do like me. The first time we had a midnight snack! It was spatial, but a little too late …

Once the pork is cooking it’s not done! Take a look at the temperature, so that everything is under control. Let’s say that an oscillation between 107 degrees and 135 degrees is acceptable and physiological. Adjust the air valve for constant cooking.

As time passes, the temperature will drop, but you adjust the air valve by opening it slowly. I recommend that you avoid opening the lid at all costs. Grab a beer, sit back and enjoy the view and, above all, the smell of your bbq: it is one of the greatest satisfactions you will have in your life as a pitmaster!

If there should be a noticeable drop in temperature, add few embers to restore 120 degrees, but normally this shouldn’t happen.

After 7 and a half hours, check the temperature of the meat with an internal thermometer. Theoretically, the meat is cooked at 65 ° C, but I recommend you wait for 87-90 ° C to have a tender and juicy piece of meat. If you haven’t bought it yet, we recommend purchasing a thermometer with a probe, now they are cheap and are essential for cooking and smoking large pieces of meat perfectly, without leaving anything to chance. The HENMI thermometer is excellent, works perfectly, has an LCD screen, six probes, 90 meters of autonomy and costs very little.

At the beginning of cooking, the internal temperature of the meat will rise quickly, but towards the end, the process becomes much slower, but do not rush, you have waited 7 hours, we have almost reached the finish line!

When the meat has a temperature of 87-90 degrees, remove it from the bbq and let it rest for 15-30 minutes wrapped in foil.

Now you can start the party with your pulled pork. Shred the meat with the help of a fork, a knife or with your hands, after 9 hours, the desire is irrepressible. Between one bite and the next, pay attention to the smoke ring, a pink ring created by the smoke on the outside of the meat and also enjoy a piece of the crunchy crust, you deserve it!

How to serve pulled pork?

Aside from the classic burger or sandwich, pulled pork can also be served alone, topped with mustard or bbq sauce.

If you want to prepare a different but very tasty recipe, try adding 50 grams of ground coffee to the rub: a delight!

We choose the Elcione from the Vitalonga winery, a full-bodied and soft wine, fruity and with clear spicy hints, which will harmonize with the spices of the pulled pork. If you want to combine a more full-bodied and tannic wine, but rightly spiced, choose Negroamaro.