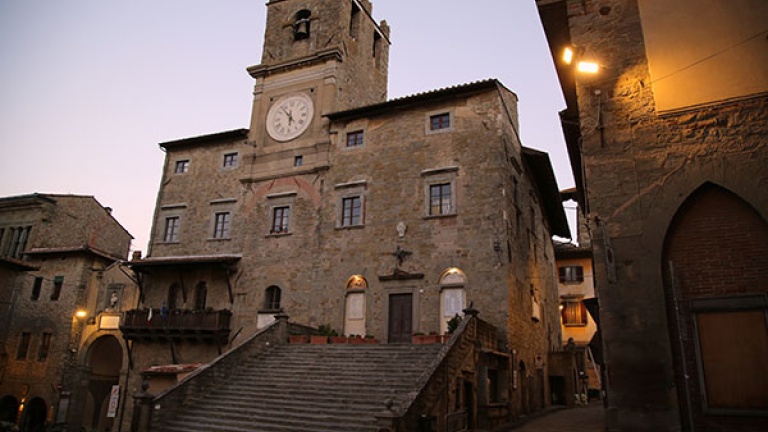 If the Tuscan countryside were a blank page to be filled with stories, and the medieval alleys climbing towards the sky were translated into words, then Cortona would be a poem or a poem with an ancient flavor that speaks of forgotten knights and loves. Set in the lush greenery of southern Tuscany, in the province of Arezzo and not far from the border with Umbria, Cortona is a town of about 23,000 inhabitants perched on a rocky hill, and is the most important tourist and cultural center of the Valdichiana.

Like a sculpture of ancient stones and bricks, guardians of secret stories, this which is considered one of the most beautiful villages in Tuscany is characterized by cobbled streets, sand-colored houses with painted wooden shutters, wires laden with fresh laundry and flowers in the windows. it is the small but significant details that make it unique.

The panoramic views open up in front of visitors unexpectedly, revealing the most fascinating views, and the unique silence of the countryside is colored by village chatter. According to a legend, it was Cam, the son of Noah, who founded Cortona, and numerous versions spread in the late Renaissance period, under the reign of Cosimo I, to propose Tuscany and Cortona as noble manifestations of the divine on Earth. . In reality, the creators of such beauty were the Etruscans, of which some fascinating archaeological traces remain.

Born Etruscan around the fifth century BC, as indicated by the remains of the walls and tombs, perhaps allied with Rome, conquered by the Goths, Cortona was then sacked by the Aretini and subjected, from 1325 to 1409, to the Casali family. Later it passed under the Grand Duchy of Tuscany, with alternating events and various cultural and urban innovations, and today we find it splendid on the hill with its heritage of medieval buildings and dominated by the bulk of the Girifalco Fortress.

What to see in Cortona

Another beautiful church is that of San Francesco, built starting in 1245 at the behest of Brother Elia Coppi and still enriched inside by an enviable series of works of art. On the main altar, there is a notable example of Byzantine art, the reliquary of the Holy Cross made of ivory and silver, while in one of the side altars you can admire the work of Cigoli from 1597 “Sant’Antonio e il miracolo della mula “. Finally, in the apse chapel, there is the funeral monument of Bishop Ubertini from the fourteenth century.

Also worth seeing is the Renaissance church of the Madonna del Calcinaio, built at the foot of the city hill by Francesco di Giorgio Martini and decorated with stained glass windows by Guillaume de Marcillat.

Lovers of art and history cannot miss a visit to the MAEC-Museum of the Etruscan Academy and of the City of Cortona, which houses various ancient finds including a particularly binding Etruscan bronze chandelier, with a gorgon’s head and decorations. various that depict animals and mythical subjects, including the splendid cast of the Chimera d’Arezzo. There are also numerous paintings, including the altarpiece by Pietro da Cortona with the Madonna enthroned and four saints, and the famous forgery of Giuseppe Guerra’s Musa Polymnia.

The Medici Fortress (or Fortezza del Girifalco) is a splendid structure located on the top of the hill overlooking the town, a little higher than the basilica of Santa Margherita. The current building dates back to the second half of the 16th century when it was completely renovated and modified at the behest of Cosimo I de ‘Medici, who had the four bastions and the ravelin built, but the existence of a military structure is much older: it opens in fact that one already existed in the VI-V century BC

Despite the intentions, the Girifalco Fortress has never been used in war; in 1766, after the advent of the Lorraine, it was disarmed and ceded to the city, which used it as a prison. With the end of the Grand Duchy of Tuscany in 1860, it was plundered of wood and stones. During the Second World War, it became a refuge for 250 daughters of Italians abroad and also a strategic position first for German soldiers, then for the Allies.

In Cortona, the quiet and exquisitely slow atmospheres should not be misleading: the desire to party is anything but dormant, and during the year there is no lack of opportunities to get to know the lively traditions of the place.

Among the best-known events are the Feste di Santa Margherita in April, the historical re-enactment of the “Marriage of the Casali-Salimbeni” in spring, the Joust of the Archidado in June, the Steak Festival around Ferragosto – followed by the Mushroom Festival. Porcino -, while one of the most important photography festivals in Tuscany is Cortona On The Move, which every year attracts visitors from all over Italy to the city.

Finally, during Advent, the Christmas markets do not enliven the historic center of the town.
Surroundings of Cortona

In the surroundings of Cortona do not miss the Madonna del Calcinaio, a splendid Renaissance church, built in 1485-1513 by Francesco di Giorgio Martini on commission from the Guild of Shoemakers.

The Etruscan hypogeum is also of considerable interest, with other hypogea nearby such as that of Tanella Angora and that of Camucia. Finally, the Abbey of Farneta is also worth a visit, an important testimony of Romanesque art and Benedictine religiosity, even if it is currently reduced to the church and the crypt.

How to get to Cortona

To reach Cortona there are various possibilities, depending on the means of transport you choose for your travels.

Those traveling by car must take the A1 Autostrada del Sole motorway and exit at the Valdichiana tollbooth, then take the E45 highway towards Perugia and take the second exit for Cortona San Lorenzo. At this point just follow the signs towards the center.

Those who opt for the train can get off at the Terontola or Camucia station along the Florence-Rome line, and then use the bus or taxi to their destination.

Climate: when to go

In Cortona, the mild and temperate climate is rather pleasant, warm in summer and lovely in spring and early autumn. The average temperatures of the coldest month, January, ranging from a minimum of 0 ° C to a maximum of 9 ° C, while in July and August it ranges from 15 ° C to 30 ° C.

The period least subject to rainfall is summer, while for the rest of the year an average of 8-9 rainy days per month is maintained.