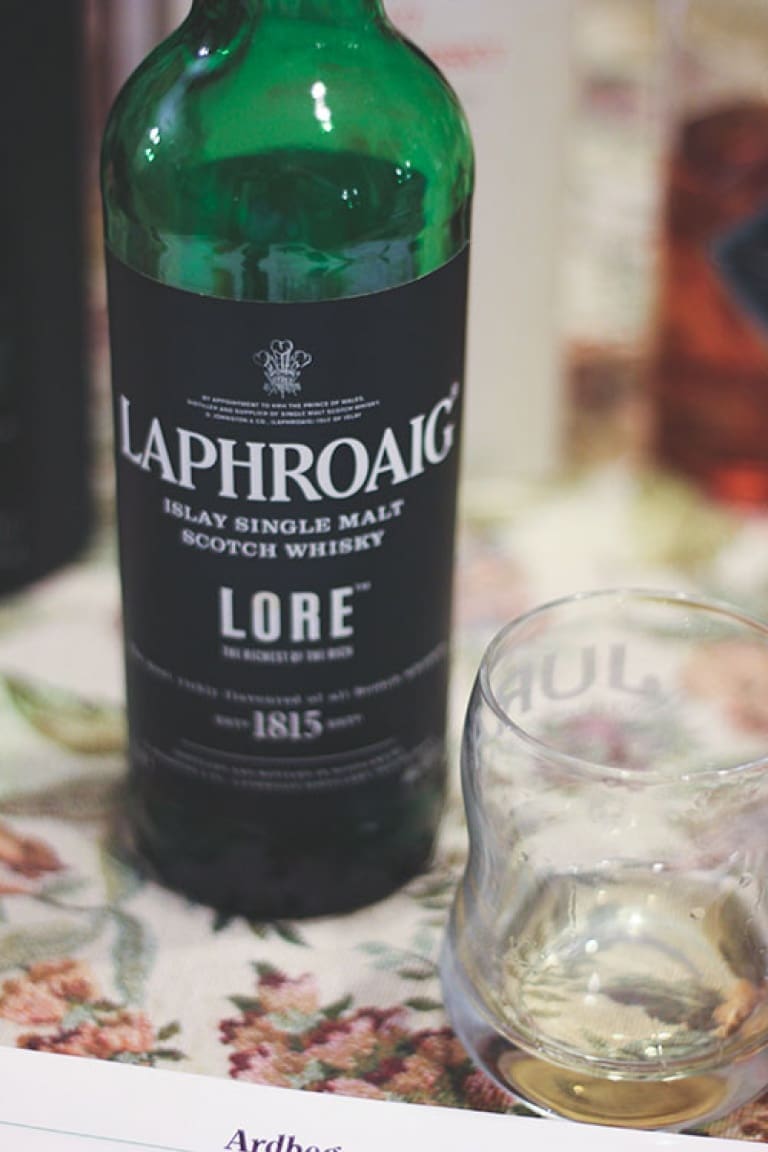 The Lore Islay Single Malt Scotch Whiskey Laphroaig is a distillate of great elegance. It is a very peaty Scotch whisky, not surprisingly born in Islay, the home of peat, but what is surprising is the finesse, the subtlety. Despite having sampled several whiskeys from the Laphroaig distillery, this really impressed us with the very subtle herbaceous notes, the “medicinal aromas” and the delicacy of the fruit. It is unquestionably a full-bodied whiskey, with a complex and stratified flurry of flavors, but also those ones who don’t love peaty whiskeys will find this bottle amazing. It’s a crazy concentration of elegance, marine suggestions, all seasoned with a peaty red thread that acts as a conduit.

The secret of this whiskey is that all this matter, the pure Scottish malt, impregnated with the salt of the Scottish Sea, was distilled, but then refined in three different types of barrels. The triad of the sacred barrels is made by Sherry oloroso, quarter cask and the charred American barrels used for making Bourbon whiskey. The result is a slow refinement that has released wood tannins, but also slightly spicy notes and splendid oxidized notes given by Sherry. The price reflects the quality of this Single Malt: 100 euros. Perhaps it seems like a lot for an intermediate product, but in reality, for a Single Malt of this caliber is not so much. Indeed for 100 euros, it is difficult to find a more interesting and charismatic bottle of Single Malt whiskey.

The bouquet of the Lore Scotch Whiskey Laphroaig

Sharp nose, pungent, that opens with a stab of salt, hay and then sea at will. It’s a tsunami of iodine and medicinal suggestions with spicy herbs, china, rhubarb macerated in incense and alcohol. The fruit is not the protagonist, rather it is defiladed, but sharp with a thousand citrus fruits. The malt instead is massive, almost rough, pumping sweet flavors of biscuit and barley. The peat runs all over the nose with a light step: it’s a bud of ash that opens flat at the call of the moon. The Laphroaig trademark is recognizable: that mixture of dust, mahogany, alfalfa, and salt on which a cloud of peat gravitates, but this time it is all declined with exemplary finesse. Excellent variety.

What does the Lore Scotch Whiskey Laphroaig taste like?

In the mouth it opens with salt and peel of candied oranges: it’s a relentless assault that keeps pushing with herbaceous swipes. The structure is impressive, it tickles your palate with pepper and chili, but then comes the flavors of almonds and dates dipped in sherry honey, a hint of caramel. Seductive finish of ginger, malt, and apple. Splendido.

Perhaps it is not a super rigorous whiskey, in the sense that the malt is almost shaped by a net stylistic refinement. However, this process is at the service of elegance and this whiskey is perfectly able to bottle the flavors of Islay like few others. It seems to be on the ferry that takes you to Port Ellen the first time you go to Islay: the perfumes are all there. The saltiness, the smoke of the ships, the algae and the warm call of the taverns.

Are we too pumped about the Lore Scotch Whiskey Laphroaig? Maybe we are a little too enthusiastic, but it’s nice to still be able to get excited about a distillate after thousands of tastings and countless labels from the same distillery. So we are not afraid to declare this whiskey as one of the most beautiful surprises of the last few years.

How much does the Lore Scotch Whiskey Laphroaig cost?