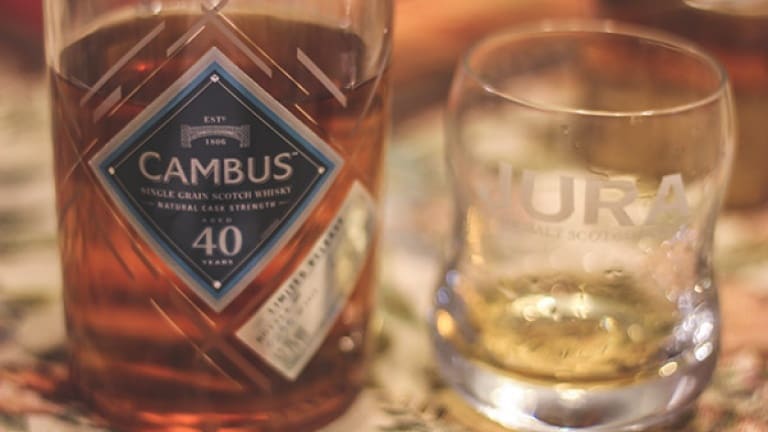 The Cambus Single Grain Scotch Whiskey Aged 40 years is a special edition bottled by Diageo in 2016 of a sumptuous whiskey born in 1975 and aged for eternity in casks. With such noble premises, we approached with hesitancy to such a precious bottle, which we tell you immediately has a fairly high cost, between 900 and 1000 euros. But it’s but it is understandable, given that were produced only 1900 bottles of this nectar.

First of all, it is a powerful wheat whiskey, cask strength bottled and therefore around 52.7%. Translation: it hits like a truck driven by a crazy monkey. And even if you are a miner from Kentucky with a palate accustomed to drinking neat kerosene, a couple of drops of water help a lot to bring out the aromas and make it a bit more docile.

But in any case, it remains a structured and mammoth distillate, not so much because of the gustatory structure, but for the alcoholic power. Indeed speaking about flavor and fragrances this Cambus 40-year-old as an incredible delicacy. But let’s take a closer look at it.

Sharp nose, dominated by caramel, black tea, mango and pungent suggestions of acetone, lacquer, and enamel. All in the norm, are the classic hints of a well made single-grain whiskey. The fruit is round and enveloping and acts as a contrast to the aggressiveness of the ethereal tones. The spice score is splendid, played with elegance: they add depth and aromatic arabesques, but do not distract from the core. Beeswax, mint, mahogany, candied citron and an echo of salt to close in a final that is a storm. Enter the studio of a painter, make a giant shake the room then you will understand what the scents of this single Scotch Grain are. Of course, if you are used to pure malt whiskeys this is the other side of the moon, yet the subtlety of “the stroke” is undeniable.

What does the Cambus Single Grain Scotch Whiskey Aged 40 years taste like?

If the nose is aggressive but well designed, as soon as you put it in your mouth it explodes in a conflagration of exotic hot fruit, cinnamon, cedarwood, and caramel. The sweetness is hidden under a mighty impetus of alcohol and blueberries in spirit. It never stops, it slaps you but with elegance. As soon as goes down the throat you feel like a tomahawk crackling your head, but you kinda like it. It’s strange and intoxicating, but it’s a nice sensation. As soon as it opens and you can pick the tannins, the dried fruit and the more earthy notes of roots, here come back the ethereal notes for another round.

Overall, it is an imaginative, sophisticated and so ethereal that it’s almost absurd: not easy to read, it should be sipper first without water, but then some drops help you to decipher this lovely amber spirit.

The density of the fruit is crazy, but the “sapid thickness” works in the background to keep the whole structure together. But pay attention, it is not a relaxing whiskey, rather it stimulates you, you feel the synapses sizzle because of thousands of stimuli. So if you are looking for an easygoing whiskey sip in your armchair in front of a fireplace, it’s not the right distillate to humanize. This Cambus Single Grain Scotch Whiskey Aged 40-year-old bites, but it does it gracefully.

900-1000 euros. Speaking of the right or not price doesn’t make much sense. This is a unique and unrepeatable distillate, it has lived much more than many people and has its history. It’s certainly not the whiskey to buy to make a drinking game with your grandfather, but if you want to discover how deep and fascinating distillates can be, then it deserves that you and 4 other friends invest together. For 5 people it’s a beautiful bottle.