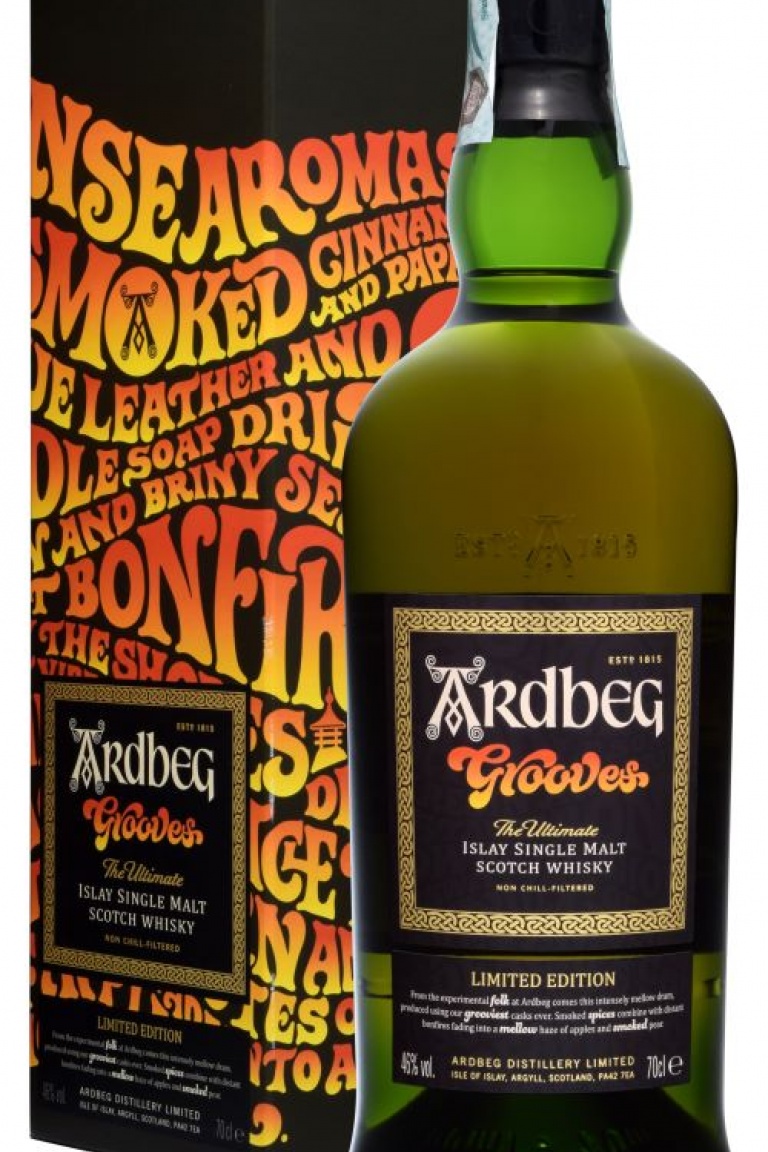 The Ardbeg Grooves single malt whisky is one of the most successful special bottlings of recent years, a special edition that combines great power, sweetness, aromatic depth, portentous oxidation and an explosive peat charge, all with the usual flavor of the sea to act as a Ariadne’s thread.

Get ready, because it is not the usual smoky and pungent classic Ardbeg that punches you on the nose. This is a soft, velvety and syrupy Scotch both in the perfumes, very oxidized, and on the palate, where it shows incredible docility and depth.

Its peculiarity is the aging in barrels used for the production of red wine, French barriques that have undergone a heavy carbonization, which caused the wood to crack slightly, on which cracks have appeared. And the juice of this single malt is all here: the roundness that gives the wine, the color with amber reflections tending to ruby, the juicy and ripe pulp that recalls plums and honey, the tannins that become protagonists and slowly peat for once. In short, it is a unique Ardbeg whisky and we hope they make more. Ok, we are passionate about Ardbeg 10, Uigeadail, Corryvreckan, but this aging in barrels used for wine it was time for them to do it, it is not a weakness to give in to softness every now and then, also because the sharp, smoky and iodized heart of the distillate it is unchanged, it feels and bites, don’t think it is a Glenfarclas.

And since we are talking about other distilleries, the aging in barrels and barriques used for red wines has already been cleared for years by large distilleries such as Bruichladdich and Glenmorangie in Scotland, but also the Japanese Yamazaki and the Irish Teeling. And the results were excellent so why deprive ourselves of this precious ruby, now that we have tasted it?

In any case, Ardbeg Grooves is a single malt whisky of undeclared age that is bottled at 46 percent alcohol.

The bouquet is splendid for its amplitude, opens with a ripe fruit, warm and enveloping with a thousand fruits: plums, figs, caramelized pears and orange marmalade. The malt is toasted and oxidized, the honey envelops everything with its sly caress, but salt, herbs and medicinal references give it the right depth, so don’t worry it’s not just sumptuous. It does not give up its subversive power, wax, oil that mixes with algae and salt. It’s just that he met the wine, he let himself be seduced by the coils and now it looks like, only as a nose, a Port wine, it has that fleshy charm that tastes of pulp, dried meat, almonds and flowers. Overall it is splendid, dark, but never shady, with peat gliding under the surface of the water, drawing dreamlike arabesques.

On the palate it is in perfect balance between sweetness of the sip, salt and smoke, with the nutty oxidized flavors of dried fruit that give severity and play down pears in syrup, if you like. The tannins, herbs and balsamic notes due to the cracks in the barrels make this noble distillate even more precious and mottled, at times it seems to perceive flavors of sandalwood, virgin wood and cedar. The structure is powerful, but on the palate it flows gracefully, despite the alcohol content being 46 degrees. If you want to add water you can do it and as usual will release delicate scents of flowers.

170-180 euros: a fair price for a single bottle, produced in limited quantities and which on the collectible whisky market will only acquire value.